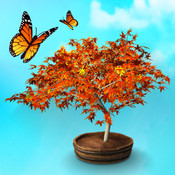 “Explore your creativity, enjoy the beauty and relax with the ‘Let’s Grow!’ app. Make your iPad your own private orangery, where you can create and admire beautiful plants and pots.” – This beautifully sums up the mission statement for Let’s Grow!.

Let’s Grow! is an iPad application for the creative people among us. It lets users design the growth of flowers, simulates natural growth processes for those flowers and lets the users display them in various pose environments; such as a photo studio or a quiet forest clearing. And of course it lets you share screenshots of your creations on facebook and twitter.

I was Lead Programmer on Let’s Grow! for 3 months. I was brought on to the project after the apps initial launch and stayed as a part of the team up until the second launch. Part of my responsibility as Lead Programmer was to facilitate a more streamlined and robust codebase, be a rubber duck to the other programmers on the team and implement new graphical features for the project, such as two custom light models and soft shadows for the plants.

During my time on Let’s Grow! the team:

The app can be found on Apple’s App Store.